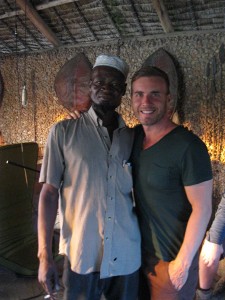 So the day arrives and we set up as usual and start recording. To get the best sound, we have had to experiment with different mic positions and combinations. The dust is proving a real problem, we cover up the expensive and sensitive mics at all times when we are not using them, but my laptop it getting sticky. 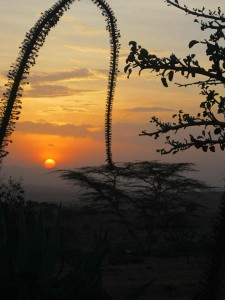 Then Alan arrives to say the film crew are delayed, won’t arrive till late afternoon. We keep working and they finally get there at around 5pm, the light is getting low. The shoot is painless enough if a bit rushed. We perform a tune for Mr Barlow, he records Ayub for the Queen’s song and everyone seems pleased.

Click here to watch and listen to SING – The Diamond Jubilee song performed by Gary Barlow and the Commonwealth Band.

Watch out for a clip of Ayub and Gary (1’56”). Can you hear the distinctive sound of Ayub’s nyatiti?

‹ Day off and finishing basic tracks